On the 2-day Garden Route Wildlife Safari, you can see the differences between the environmentally diverse biomes of South Africa as well as the rich variation in wildlife. From lush green mountains and oceans on the Garden Route to the dry semi-desert filled with ostriches of the Klein Karoo. South Africa has a lot to offer, and with this tour, you can have a quick overview from Cape Town along a part of the Garden Route and back again along the most extensive wine route in the world – Route 62. While covering two game drives, a bushwalk, and an optional elephant walk, you can experience some of the spectacular animals. It was a well guided and adventure-filled road trip. You can read more about my experiences below.

Shortly after our last pick-up in Gordons Bay, we arrived at our first stop for a quick breakfast/brunch. We stopped at the Peregrine farm stall, where they serve freshly baked bread and other foods for on the go. As well as coffee, thee, hot chocolate and freshly made juices from their lands. After some road trip shopping, we headed back on the road.

The area we drove through was beautiful with mountains, green valleys, and sometimes a peek on the coast. Our guide informed us all he knew about the regions and the history of the lands. How the country was colonized and what happened during those years.

Later we had another stop before we arrived at Botlierskop for our first game drive. At Botlierskop, we had an extensive lunch and hopped on the 4×4 vehicle. As we drove deeper into the park, we started to see more wildlife. Different antelope species walked in their groups and grazed on the grass, our guide explained how to recognize the different species and what their abilities are.

For example, the waterbuck can be recognized by the white toilet seat like mark on its rear. Moreover, the kudu can jump to significant heights of around 3 meters without much effort. And the ostrich male has a darker color than the female to camouflage the eggs at night, while the mother protects the eggs during the day with her grey camouflage.

Botlierskop has abundant wildlife such as giraffes, rhinos, lions, elephants, zebras, and more. Most of the more popular game of the park are rescued from various areas, like, the circus. Luckily these animals can roam around freely in the park, and they have to scavenge for their own food.

As our game drive continued, we spotted the giraffe babies, who still rise above the vehicle. As we took pictures, the mother arrived and blocked the road for us. She was unwilling to walk faster or move for our truck. But eventually, the mother was distracted by food and started to eat the leaves from a nearby tree.

It was almost time to head out of the vehicle for a short bushwalk. Unfortunately, rain started to pour down on us, and we were unable to do the walk. However, we stayed dry and extended our game drive through the park. Because of this, we ran into the three lions. We first spotted the two females laying in the grass as the rainfall progressed. Eventually, the male popped his head up as well.

Our first safari experience was almost over before someone spotted the elephant family from our vehicle. The gentle giants roamed around looking for food as the smaller elephant ran after his family. Satisfied that we saw most of the animals in the park, we headed back to the main building, where the rhinos were waiting for us.

Three rhinos roamed around the building, and they came quite close. But it was time to head to our accommodation in the Ostrich capital of the world – Oudtshoorn. As you go over the mountain pass, the lush green grass of the Garden Route changes into the dry semi-dessert of the Klein Karoo. As we entered the Klein Karoo, ostriches started to pop-up out of nowhere. There are many farms along the route that breed ostriches for their meat, eggs, and feathers.

The lodge is in the small town of Oudtshoorn, and it is a cozy place. We could check-in and drop our stuff in the private room before dinner. There were various options for everyone’s liking, such as ostrich or chicken kebab, spinach pot, or lasagna. After we ate our food around the fire, most of our group headed to bed since this was a long day of wildlife adventure, and we had to wake up early the next morning.

In the morning, we checked out again, and we enjoyed our warm breakfast with scrambled ostrich eggs or a fruity yogurt with granola. The ostrich eggs are massive, and one egg is almost equal to 24 chicken eggs. After the breakfast it was a short drive to our next game drive at Buffelsdrift.

Before the game drive, you could do an optional Elephant bushwalk as they progress towards their water source. We decided not to do this, but we could see the walk happening from the main building of the park – which was placed next to the hippo pool as well. So, we were looking for hippos as the rest of our group walked after the orphaned elephants.

Immediately after, we got into the 4×4, and we started our second safari experience. However, due to the heavy rainfall during the night, which was the first proper rainfall since January, most animals were hiding in the bush and did not come out for the sun. Except for the meerkats, which just got out and started their day to day routine of grooming and playing with each other.

They were running around their hill and were about to head out in search of food. So, we left to leave them to be. The other animals did not want to be seen, thus our guide started to explain more about the area and the local plants. Since it is a semi-desert area and water is not always available, the animals adapt themselves to the amount of water. Such as the red hartebeest, which does not sweat or lose liquids until it absolutely musts or has found a good water source.

The most eaten plants of the Klein karoo hold a significant amount of water in them and serve as the primary water source for most of the herbivores. Our guide hopped out of the vehicle for all the plants that were edible or had a unique trait. Some plants, as mentioned, hold a lot of water, and the plant that we had a taste of had a green bean-like taste but was salty as well.

As well as the Aloe Ferox which looks similar to the Aloe Vera. Its sap serves as a natural sunblock as it dries into a hardened skin. You can drink the juice as well; however, this works as a natural laxative. The San people used all these local plants as they have significant value as medicine, antidotes, or other functions.

During the game drive, we saw the four months old zebra, which was all alone grazing on the bush. Luckily not much later, we heard the calling of the mother, so we knew it was not left alone. We had a quick drink break in the park, and we could have a short walk in the area before heading back to the hippo pool.

On the way back, we spotted some antelopes and giraffes, who finally came out to enjoy the sun. From Buffelsdrift, we headed back to Cape Town along the famous and longest wine route of route 62. There we stopped for a lunch break. You could order your food at the restaurant, and while they prepare it, you can cross the street to a large souvenir shop. We had an hour for lunch and the shop, and honestly, you still need to hurry since the shop is huge. They have all sorts of souvenirs such as painted ostrich eggs, jewelry, wooden sculptures, and much more. Afterwards we had one more stop to stretch the legs before the tour ended as we returned to Cape Town.

The two-day wildlife safari was a perfect trip to experience the abundant wildlife of South Africa while not wandering too far away from Cape Town. The parks work perfectly together since Botlierskop is located on the Garden Route with green fields and colorful plants. While the Klein Karoo has a semi-desert with cactus-like plants and bush as well as the Ostriches and other local wildlife. Moreover, the tour gives you the option to taste local foods and buy souvenirs. It was an overall excellent and well-guided experience.

For Tours and Accommodation, Check-out more below: 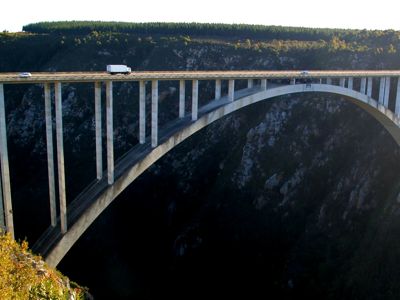 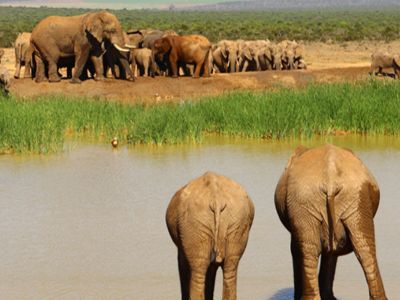