As someone with a fear of heights, I was lucky to do the abseiling off Table Mountain. This incredible experience helped me conquer my fear with clear instructions and helpful guides. The Abseiling has breath-taking views of the coastline of the Atlantic Seaboard. It is a fun, thrilling and beautiful experience. Followed by a brief but scenic hike back to the top of the mountain. Further, on this blog, I will tell you about my experience during the abseiling off Table Mountain.

There are two ways up Table Mountain; you can go hiking or by the Cable Way. Hiking is a spectacular adventure and an experience itself. However, this consumes a lot of time, which I did not have. Therefore, I took the Cable Way up to the heights of the mountain. The cable car is a round-shaped gondola, and it rotates mid-air – Providing a fascinating look on the City Bowl as well as the hiking routes to the top of Table Mountain. The moment the car arrived at the upper cable station, I briefly signed a contract, and we walked to my abseiling guide. I have never done abseiling before. Because of this and my fear of heights, I began to feel stressed for the climb down.

My guide explained the basics of abseiling clearly. He started by putting on the safety harness, followed by what the purpose of the two ropes is. One is for the guide as a safety rope, and the other is for you to hold as you hop down along the mountain. There is a practice area on the top of Table Mountain where you can test how the ropes feel on a flat surface. As I gave the lines a try, the guide helped me with the right way to stand, so the abseiling would go as best as I could. The trial was extremely helpful for me since I now had an idea on how to do abseiling.

After the brief lesson, we walked towards the platform. The platform isn’t located on the flat surface of the mountain. But it is located off the path, on a cliff, 1000 meters above sea level. However, for the walk down, I was attached to ropes for safety. On the platform, I still felt stressed, but less than before. A different guide helped me with the helmet and the attachment on to the two ropes. After that, he provided some gloves for the heat exposure of the lines. You can give your phone to the guides, and they will take pictures from the platform as you go down. But before, I started the guide wanted to be sure that I got the technique right. Luckily, he corrected my mistakes, so I was ready for the descent along the cliff.

As I hanged with my back facing the cliff, the guides took pictures and told me that there would be a surprise somewhere in the middle of the way down. The first part is a short way down, so you can get the feeling of it before the real fun begins. This made the experience even better because it was my first time, and during the first part, step by step, I got the hang of it. Mid-way, I felt confident enough to do some jumps. The hops were a fantastic feeling as I swung back and forth during the decline. While I started to feel the ground beneath me, I realized, that I had arrived at the second platform.

The ledge was three steps long towards the abyss and from there on the way down was steep. So, I went down step by step, and as I got used to it, I looked around. The views from the abseiling are breathtaking. Because of this, I misstepped and started to swing from side to side. Luckily, I corrected myself and stopped to take time for the views. From the cliff, you can see Camps Bay and its beaches, the Twelve Apostles, and the vast and endless ocean. As the descend continued, I became relaxed and enjoyed both the experience and the views. Until I heard my guide scream that I should do some jumps. Since I forgot to do some hops going downward, I did some last jumps until my return to the ground where my guide detached me and showed me the way back up.

During the small hike back to the top of Table Mountain, I was entertained by the marvelous scenery of the Atlantic Seaboard. The sight was almost as spectacular as the view from the abseiling. Fortunately, I brought my camera with me to take some pictures. The hike was not intense, and we were back on top in no-time. It could be that the hike felt short due to the views or that I just had this fantastic experience. After we returned, I walked to the information desk for my certificate, which says that I have done the abseiling.

The abseiling was surprisingly do-able since I expected to be a difficult thing to do. Because it was something that I picked-up relatively fast, I could enjoy it the fullest. Even though I fear heights, the guides knew how to make me feel safe and gave me the confidence to do it. It was an unforgettable experience, and I can’t imagine a better location for abseiling, mostly because of Table Mountain’s incredible views and steep descend.

For Tours and Accommodation in Cape Town, check-out the links below: 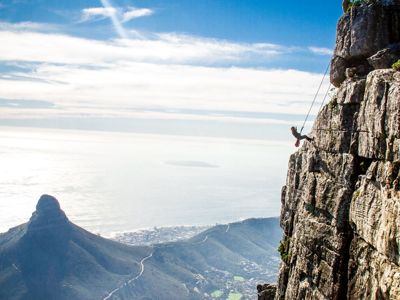