In this video blog you will see an escorted lion taking a casual walk before he takes his opportunity to hunt down a kudu in front of a fleet of vehicles, while being filmed and chased by the cars, the lion fights the kudu on the road.

At the start of the video, the lion is escorted by a fleet of 4×4 vehicles filled with excited tourists. The lion casually walks over the road and seems to be unbothered by the closely following cars as well as the created roadblock on the other side. But then the lion spots a lone kudu on the road and decides to go for the chase. The lion manages to grab the kudu by the behind legs as the kudu desperately tries to kick the lion of him. This fight happens in the middle of the road right in front of all the tourists. As the lion attempts to hang on the kudu, he receives some heavy kicks. But as they cross the road to the other side, the lion takes its chance and takes the kudu down.

Usually, male lions in a pride don’t hunt; they let the females do it for them. Females are less visible in the bush, because of their small size and lack of manes. The lionesses hunt in groups, and the male claims his portion of the meal without putting in an effort. The hunting groups take down larger animals such as giraffes, and sometimes even elephants. However, the male lion had to fight to claim the pride by kicking the other males out of the group. Probably one of those kicked out lions was this one in the video. Usually, a lone lion hunts for smaller game such as impala and warthogs. But this impressive hunter was able to take down a massive male kudu for lunch, which is unusual. 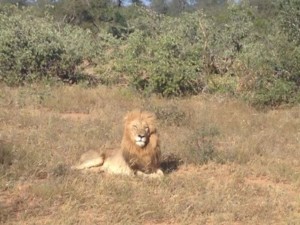 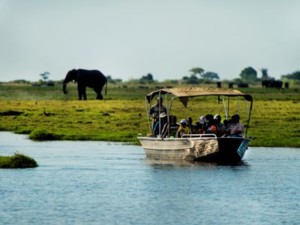 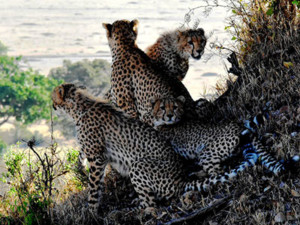